Harter Featured in Art after Stonewall

Art after Stonewall, 1969-1989 showcases the powerful art by LGBTQ artists during the gay liberation movement in the U.S. Edited by Jonathan Weinberg, an artist and art historian at Yale School of Art, Art after Stonewall visually chronicles the impact of the gay civil rights movement on the art world and vice versa. Seven essays by art historians, culture critics, and activists connect artistic output to queer life, subcultures, and ideas.

Harter’s work is gathered with those of other artists of the era, including Robert Mapplethorpe, Andy Warhol, and Nan Godin, among others.

Bathhouse Adonis appears in the“Sexual Outlaws” chapter. In the foreground, an illuminated young man stands and surveys a bathhouse scene, where men of mixed generations and backgrounds sit and gaze from the shadows. Harter frequently painted the model on whom the young man is based.

The publication accompanies the Art after Stonewall, 1969-1989 exhibition at Leslie-Lohman Museum and New York University Grey Art Gallery. Weinberg curated the exhibit, organized by the Columbus Museum of Art.

Both publication and exhibition commemorate the 50th anniversary of the Stonewall riots in June 2019.

Bathhouse Adonis resides in the permanent collection of the Leslie-Lohman Museum.

Bathhouse Adonis in Art after Stonewall 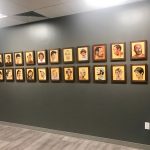