This year marks the 50th anniversaries of the Stonewall riots and the first art show of Charles Leslie and Fritz Lohman, the partners who became founders of the Leslie-Lohman Museum in New York.

In fact, the uprising against police by patrons and protesters at the Stonewall Inn and the homoerotic art show took place on the same night. Leslie and Lohman even went to Greenwich Village after the show and saw the riots of LGBTQ people, a scene he describes as resembling “the end of the world.”

Charles Leslie recounts that experience and more in a recent interview with The New York Times, “How a Self-Taught Curator Became a Gay Rights Champion.”

The article chronicles the connection between that art and gay liberation from that pivotal night through the AIDS epidemic through today. That history is on display in the current exhibition at the museum, Art after Stonewall, 1969-1989, and book of the same title published by Rizzoli Electa.

When asked what he’s most proud of in the show, Leslie replies, “That we’ve resurrected some of the early work by artists who first attracted people, like Marion Pinto, Delmas Howe, Sandra DeSando, John Burton Harter, Michela Griffo, and Arthur Tress, because we were not allowed to show anything that was out of the mainstream.”

Harter’s painting Bathhouse Adonis is featured in the exhibit and book.

Bathhouse Adonis in Art after Stonewall 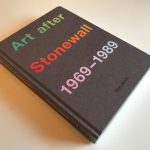 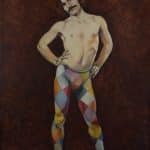