“At any point over the past several decades,” he writes, “you might have found, hanging on Leslie-Lohman walls, a circa 1900 photograph of Sicilian youths by Wilhelm von Gloeden, or George Bellows’s 1923 print of a men’s bathhouse, or one of John Burton Harter’s academic 1980s nudes. You would have been far less likely to find the equivalent of Zanele Muholi’s portraits of the black South African lesbians, or Chitra Ganesh’s feminist mash-ups of South Asian comic strips, or anything at all resembling the doll-like hand-stitched sculptures of the transgender artist Greer Lankton — all of which have recently arrived in the collection and look completely at home in the show.”

Harter is known for his exquisite figure studies and compositions of the classical male form. Expanded Visions includes an untitled acrylic painting of a young male nude by the artist. 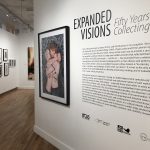 J. B. Harter and Expanded Visions at Leslie-LohmanExhibits, Publications